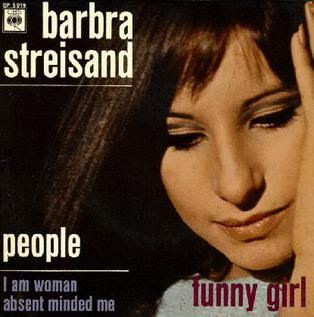 
This is considered Barbara Streisand's signature song.  Here is some background information on this song from Wikipedia:


"People" was one of the first songs written for the musical score of Funny Girl. It is based on the life and career of Broadway and film star and comedienne Fanny Brice and her stormy relationship with entrepreneur/gambler Nicky Arnstein.

Composer Jule Styne and lyricist Bob Merrill were hired to write the musical score and met each other for the first time in 1962 in Palm Beach, Florida. They wrote their songs by day and tested them by night on the Palm Beach socialites at cocktail parties.

As they worked to develop the character of Fanny Brice, they needed to write a special love song depicting her feelings towards Nicky. According to the book, "Jule: The Story of Composer Jule Styne" by Theodore Taylor, "Jule turned to his collaborator Bob Merrill, 'You told me the other night to work on [the lyric] "a very special person." I think I've got a helluva melody for it.'...'Great,' Merrill yelled. 'But now it's not gonna be just a "special person." Listen.' Then he ad-libbed, while Jule played the melody again: 'People, people who need people'...The song 'wrote' in thirty minutes..."

Ironically, "People" nearly did not get included in "Funny Girl" during early try-outs as the producers did not like it. Bob fought to keep the song in and finally one night, Barbara was allowed to sing it on stage. It stopped the show and history was made.

The single by Streisand was released in January 1964, and peaked at number five on the Billboard pop chart, becoming the singer's first Top 40 hit. It also spent three weeks at number one on the Pop-Standards (adult contemporary) chart in June/July 1964. This helped to cement its inclusion in Funny Girl, which ran on Broadway from March 26, 1964 to July 1, 1967, and earned Styne and Merrill a nomination for a 1964 Tony Award as Best Composer and Lyricist. The single version was recorded on 20 December 1963 and produced by Mike Berniker.