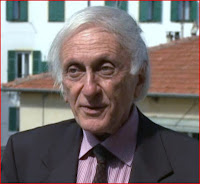 We welcome back regular contributor, Salomon Benzimra. One of the hallmarks of liberal democracy is freedom of the press, to publish without government interference. This is evident in all western nations; less evident is self-censorship or having a too narrow interpreation of democracy and free expression that conforms only to an ideological bias. Although I understand such a reaction, I disagree with it. Accordingly, here is this piece. Mr. Benzimra writes: "This is in response to an article published on July 18, 2012, by UCLA Professor David N. Myers in the Jewish Journal, titled “Law, politics and the settlements.” I submitted this piece to the Jewish Journal but my request remained unanswered."

The Edmond Levy Report has produced far-reaching tremors, which shook many ivory towers hitherto shielded from Israel’s historical and legal reality. That may have been the indirect intent of the Levy-chaired committee: To bring forward a fact-based, thought-provoking perspective to those who can think freely, and to force the others to further retreat into their untenable positions.

Among those in the latter category, Professor David Myers states that the Levy “findings” (a term he encloses in derogatory quotation marks) fly in the face of what he characterizes as “informed judgments” by a whole slew of unnamed experts.  But in reality the Levy Report put a fatal chink in the armour of the notoriously fake Palestinian narrative.  It is fascinating to watch the fecklessness of opinion shapers in academia, politics and the legal community who attempt to impose their “alternate reality” by dint on continuous repetition and in spite of clear evidence to the contrary.

And so, Prof. Myers continues to whip a dead horse by supporting the erroneous interpretation of the Fourth Geneva Convention (FGC), as Naomi Chazan did a few weeks ago.  While she characterized those who do not share her opinion as “right-wing contortionists”, Prof. Myers seems equally “annoyed” at the “pretzel arguments” advanced by “legal acrobats.” The reality is that those who persist in upholding the validity of the FGC with regard to the “occupation” of Judea and Samaria have been proven wrong time and again by the brightest legal scholars in the field.  I wonder if the intellectual posture of Prof. Myers is to persist in error by fear of facing a truth that he has assiduously strived to hide, dismiss or distort.

This approach is not the hallmark of intellectual courage.  I urge Prof. Myers to ponder the words of one of the greatest socialist leaders of a bygone era, Jean Jaurès, when the European Left held on to lofty principles and had a sense of honor:
Courage is to seek the truth and to tell it; to refuse to submit to the law of the triumphant, passing lie; and not to echo in our thoughts, our statements and our actions the idiotic applause and the fanatical crowds. (Note: my translation of a speech Jean Jaurès delivered in 1903).

Regrettably, the reaction to the Levy Report by some prominent members of the Jewish community stands poles apart from what Jean Jaurès advocated.  Instead of showing courage by telling the truth, the 40 signatories of the petition (initiated by the Israel Policy Forum on July 15) showed only fear of rocking the sinking boat of the “two state solution.”  Instead of standing firm against the delegitimization of Israel – which has its origins in the false accusation of “illegal occupation,” and is actively promoted in many corners of the so-called “international community” – they preferred to preserve the triumphant lie of the “occupation”, lest the international community gets angry at Israel.  Instead of recognizing the real objectives of Israel’s enemies, they idiotically applauded the same “peace process” which the fanatical Palestinian leaders manipulate against Israel.  In his latest article, Prof. Myers shows that, in all probability, he is in total agreement with the 40 signatories.

The main concern of Prof. Myers seems to be the death of the “two-state solution.”  I suggest that he look at it in terms of maintaining Israeli territorial integrity, rather than lamenting the end of an illusion – a “territorially viable Palestinian state.”  Why is he so concerned by the death of an artificial “Palestinian” concoction which had no basis in either history or law?  Why does he cling to this tiresome, false dichotomy of Israel being threatened to be either a non-Jewish state or a non-democratic state in the absence of a “Palestinian” state?  Is he not aware of the existence of perfectly democratic nation-states —e.g., Switzerland and Japan, to cite a few – where citizenship is not automatically granted to their entire population?

The Israeli-Arab conflict is a complex issue which must be addressed one step at a time, the more so because it has been turned upside down by four decades of relentless distortions.  First, the world democracies must recognize the fundamental Jewish sovereignty over the whole land west of the Jordan River, as it was established under international law over ninety years ago. Then, Israel will draft a policy to deal with the mixed population living in Judea and Samaria in the fairest possible way, upholding their civil and religious rights, along with Israel’s security needs and its Jewish character.

In any case, the last thing to do is to avoid the truth and continue to fiddle with “constructive ambiguities” of dubious value, which have only produced bloodshed and growing hatred since the “peace process” came about.