8 Authors Who Published Only One Book 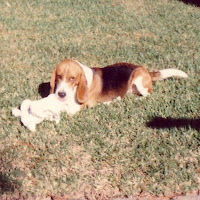 In this Guest Post, Eric Thompson from Texas (his dog Toby is shown at left), briefly looks at eight authors, each well known for a particular work of full-length fiction. That they have written and published other works is not generally known by the public; they are forever linked to their one famous literary works. Thompson writes: "Earlier, these authors were described as one-hit-wonders. That’s not entirely correct. A few of them, like Pasternak and Wilde, had other published works, but all are most well-known for a single amazing book. Other authors earned fame and acclaim with multiple published works. These eight authors did it with one."

Stephen King, Sue Grafton, and Dean Koontz have each written dozens of novels. They are successful, prolific authors whose works span decades. Other authors have been less productive but no less successful. They are literary one-hit-wonders who found acclaim with one book. Here are eight amazing authors who published only one book.

Emily Brontë, Wuthering Heights: Wuthering Heights was first published in 1847 under the pseudonym Ellis Bell. Its initial reviews were mixed, but it eventually became a classic of English literature. It has been adapted to film, radio and television repeatedly since the 1920s. Emily Brontë died a year after her book debuted.

J.D. Salinger, Catcher in the Rye: Salinger wrote a number of short-stories and novellas that were published in collected volumes, but Catcher in the Rye was his only full-length book. It was an immediate success, but some criticized its content. Salinger, seemingly uncomfortable with the attention, became reclusive and published less frequently. He died in 2010, publishing his last short story in 1965.

Anna Sewell, Black Beauty: Sewell published Black Beauty in her late 50s to encourage humane treatment of horses. It was an immediate bestseller and made Sewell an instant success. She wrote the book while in declining health and, like Emily Brontë, died before being able to publish more works. Her one and only book is one of the bestselling books of all time.

Oscar Wilde, The Picture of Dorian Gray: Wilde was a poet and playwright and like Salinger and Mitchell, published a number of collections, but only wrote a single novel. The Picture of Dorian Gray was criticized as immoral and was heavily censored. Wilde revised the book, and it eventually became a Gothic classic. Wilde went back to poetry and plays and never undertook another novel.

Ralph Ellison, Invisible Man: Invisible Man was the only one of Ellison’s works to be published during his lifetime. It addressed social and racial issues of the time and received a Nation Book Award. Ellison tried to write another novel, but it was left unfinished.

Harper Lee, To Kill a Mockingbird: Published in 1960, To Kill a Mockingbird was an immediate bestseller. The critically acclaimed classic won Lee a Pulitzer and a Presidential Medal of Freedom, and its 1962 film adaptation won three Academy Awards. Lee never expected the novel to be successful and shied away from the attention she received. She started other novels, but, dissatisfied with them or unwilling to face more publicity, abandoned them.

Boris Pasternak, Doctor Zhivago: Pasternak had already written an influential anthology before writing Doctor Zhivago. The book for which he is best known was rejected by publishers in the U.S.S.R. because it was considered anti-Soviet. The book was smuggled to Italy and published in 1957. Doctor Zhivago won the Nobel Prize for Literature, and its 1965 film adaptation won five Oscars. Pasternak died in 1960 having never completed another novel.

Earlier, these authors were described as one-hit-wonders. That’s not entirely correct. A few of them, like Pasternak and Wilde, had other published works, but all are most well-known for a single amazing book. Other authors earned fame and acclaim with multiple published works. These eight authors did it with one.