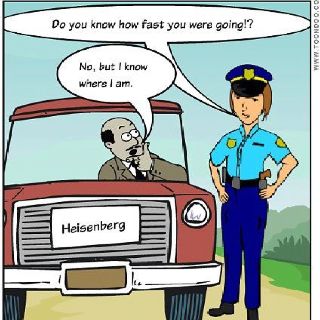 The vet at the zoo had a problem: beryllium. He had only two options, to curium or to barium. He lead the dentist to boron the bear’s tooth. I’d give a nickel to have seen what happened when the bear woke up. Now the vet and the dentist argon. It’s ironic what can happen when you have a beryllium and try to curium.

There was a biology student who was studying equilibrium in sea birds with a specific focus on terns. He proposed that giving measured doses of THC (from, of course, marijuana) and observing their flight patterns would give some insight to the problems of equilibrium in three dimensional space. This proposal being given in a more liberal era, so the student got the funding.

He filled out mountains of forms, set up a lab with a ready supply of terns, and proceeded on his way. After a year of diligent work, grovelling monthly before the review committee to get his stipend, and living with drugged terns, he completed his study.  With trembling hands, he delivered his 247-page report, complete with charts and graphs, to the review committee. The august body peruses his study, asking penetrating questions and reducing our student to Jell-O

Finally, the department head rises. The light reflects off her steel rimmed glasses as she stares down at our student. "There is a lot of good work here," she says. "But we can't accept this report. You have detailed marvellously the effects of THC on terns but you forgot one essential step: you have no control group." Our student turns pale and says, "You don't mean..."

"Yes. I'm afraid so. You left no tern unstoned."

One day a group of Darwinian scientists got together and decided that man had come a long way and no longer needed God. So they picked one Darwinian to go and tell Him that they were done with Him. The Darwinian walked up to God and said, "God, we've decided that we no longer need you. We're to the point that we can clone people and do many miraculous things, so why don't you just go on and get lost."

God listened very patiently and kindly to the man. After the Darwinian was done talking, God said, "Very well, how about this? Let's say we have a man-making contest."

To which the Darwinian happily agreed. God added, "Now, we're going to do this just like I did back in the old days with Adam." The Darwinian said, "Sure, no problem" and bent down and grabbed himself a handful of dirt.

A businessman needed to employ a quantitative type person. He wasn't sure if he should get a mathematician, an engineer, or an applied mathematician. As it happened, all the applicants were male.

The businessman devised a test. The mathematician came first. Miss How, the administrative assistant took him into the hall. At the end of the hall, lounging on a couch, was a beautiful woman. Miss How said, "You may only go half the distance at a time. When you reach the end, you may kiss our model."

The mathematician explained how he would never get there in a finite number of iterations and politely excused himself.

Then came the engineer. He quickly bounded halfway down the hall, then halfway again, and so on. Soon he declared he was well within accepted error tolerance and grabbed the beautiful woman and kissed her.

"What was that about?" she cried.

"Well, you see I'm an applied mathematician. If I can't solve the problem, I change it!"