Egypt & The Jews: As It Once Was 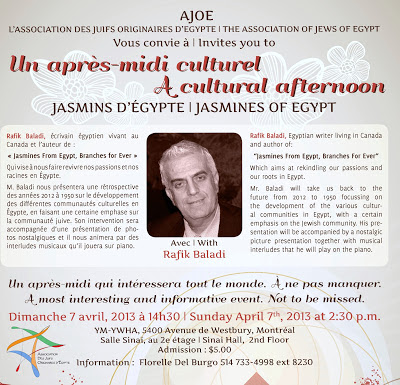 I don't often promote public lectures or musical events, chiefly because that is not the general purpose of this blog. Yet, do so on occasion when it has merit and it promotes better understanding between people of different nationalities and cultures.

Tensions exist in many parts of the world, and we need ways to overcome our distrust and fear, often based on ignorance and the cynical manipulation of people by politicians for personal gain. Such is now the case, for example, in Egypt, and its tensions with its neighbour, Israel. What better way to defuse tensions than to find out what we have in common; such is often left to the artistse to convey, who generally hold more univeral views than politicians, and whose mind is more open to various points of views.

My friend, Rafik Baladi, is such an artiste. Originally from Egypt and now residing in Montreal, Mr. Baladi is giving a presntation at Montreal's Jewish Y on Westbury  Avenue of how life was once in Egypt. The event is sponsored by Association des Juifs Originaires d’Egypte (AJOA), an organization dedicated to Egyptian Jews.


Several Jewish communties within the age bracket of 55 to 75, originating from Egypt, Iraq, Iran and elsewhere in the Middle East, are invited to attend, together with their children. I will present my book and entertain a session of rekindling our Passions and Roots (please see attached poster). During the presentation I will also play some old Egyptian folklore (Jewish and Popular) on a seven-foot Steinway piano together with both nations' national anthems and promote my book and invite audience interaction.

I thought of sharing this with you and, most of all, ask you if it were possible for me to mention it to your friends. During the presentation, I will cover the school of Abraham Betesh in Heliopolis, the Alley of the Jews in Cairo, the world's second-oldest Jewish cemetery (in Egypt), pictures of former Egyptian-Jewish actors and actresses and artists and other nostalgic pictures that may evoke memories to all of us (including old department stores, Jewish Tribunal Court and the hospital in Alexandria as well as the street of Eliahou Hannavi, Port Said and Saint Catherine).

I am told that the Consul General of Egypt, a friend of the Egyptian-Jewish Community in Montreal, will attend.

Such is the greater part of the e-mail that Mr. Baladi sent me, and which I share with you. If you are in the Montreal area during the time of the lecture, consider attending.

Posted by Perry J Greenbaum at 9:00 AM

Mill Pond The feathered waterfowl all have wonderful personalities; the one in white, whom we have named “Flatfoot,” is especially delight...

On My BookShelf : “Some of the books that I have read; and from which I have gained understanding”