The Goat From Krakow 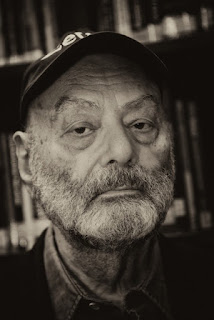 There is in the canon of Jewish humour an old joke about a family living in close quarters with a goat. One family actually tried that, George Jochnowitz writes—his father’s: “Whether or not grazing was possible on Ulica Dietla, an apartment must have been a tough place for humans and a goat to live together. The problem reached its peak when, a day or so after moving to the city, my father left to go to school. I don’t know how old he was, but I think he was about six. The kid wanted to follow him, and jumped through the window, breaking the glass. He landed on the side walk unhurt, since goats are good at living in mountains and jumping from high places. My grandparents fixed the window.”

When my father was a kid (human), he had a pet kid (goat). The two kids loved each other despite the difference in their species. Then his family moved to the city, to Krakow. My father asked his parents if his pet kid could move with them. My grandparents, surprisingly, agreed. They moved into an apartment house at 49 Ulica Dietla. Their apartment was on what Americans call the second floor and what Europeans call the first floor.

When my father told me about his pet kid, I too was a kid. I didn’t ask how it happened that grownups would agree to share their urban apartment with a goat. Alas, it is too late to ask now. He was born in 1903 and died many years ago, in 1962.

Ulica Dietla could have been a very good place for a goat to graze. It is a very wide street, with a big grassy lane in the center—almost a narrow park. I believe that part of the old city wall of Krakow ran in the place where Ulica Dietla is today. Krakow, once the capital of Poland, was north and west of the wall. South and east of the wall was what used to be an independent city, Kazimierz, named after Kazimierz Wielki, or Casimir the Great, who became king in 1333—the king who invited lots of Jews to move to Poland. Even before that, in 1264, Jews were granted freedom of religion in Poland. Jews were allowed to live in Kazimierz but not in the city proper. Eventually, the area became part of the city and therefore the major Jewish neighborhood in Krakow.

Whether or not grazing was possible on Ulica Dietla, an apartment must have been a tough place for humans and a goat to live together. The problem reached its peak when, a day or so after moving to the city, my father left to go to school. I don’t know how old he was, but I think he was about six. The kid wanted to follow him, and jumped through the window, breaking the glass. He landed on the side walk unhurt, since goats are good at living in mountains and jumping from high places. My grandparents fixed the window.

The next day, the same thing happened. My grandparents decided that they and their children could no longer share their living quarters with a kid who broke the window every day. They sold the kid, who, I would guess, was slaughtered within a day or two.

In 1927, my father moved to New York. Had he remained in Krakow, he too would have been slaughtered, which is what happened to his five siblings who still lived in Poland.

George Jochnowitz was born in New York City, in 1937.  He became aware of different regional pronunciations when he was six, and he could consciously switch accents as a child. He got his Ph.D. in linguistics from Columbia University and taught linguistics at the College of Staten Island, CUNY.  His area of specialization was Jewish languages, in particular, Judeo-Italian dialects.  As part of a faculty-exchange agreement with Hebei University in Baoding, China, he was in China during the Tiananmen Massacre. He can be reached at george@jochnowitz.net.
***********************************