Cassini Flyby Of One Of Saturn’s Moons, Enceladus 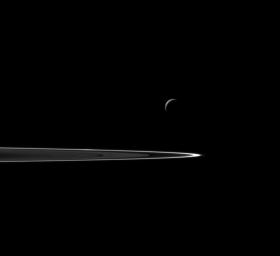 Enceladus Fly-by: NASA’s Jet Propulsion Laboratory writes: “Following a successful close flyby of Enceladus, NASA’s Cassini spacecraft captured this artful composition of the icy moon with Saturn's rings beyond. This view looks towards the trailing/anti-Saturn side of Enceladus. North is up. The image was taken in visible light with the Cassini spacecraft wide-angle camera on Oct. 28, 2015.”
Photo Credit & Source: NASA

Last week, the Cassini spacecraft captured an image of Enceladus, one of the 53 named moons orbiting Saturn (there are 62 in total identified thus far, the nine unnamed identified by year of discovery); NASA writes about the Cassini Solstice Mission dubbed “E-21: Deepest Dive Through the Plume”:


This daring flyby will bring the spacecraft within 30 miles (48 kilometers) of the surface of Enceladus’ south polar region. The flyby is Cassini's deepest-ever dive into the plume of icy spray that issues from fractures in the south polar region. The encounter will allow Cassini to obtain the most accurate measurements yet of the plume's composition, and new insights into the ocean world beneath the ice.

Titan is the largest of its moons; and Enceladus’s icy surface make it among the brightest objects in the solar system. It also contains, NASA's Cassini site says, “ an icy plume shooting from this moon, and subsequent observations have revealed the spray contains complex organic chemicals.”

The mission to Saturn began almost two decades ago; it was launched on Wednesday, October 15, 1997 at 4:43 a.m. EDT, when NASA’s Glenn Research Center says, “a Titan IV-B with a Centaur high-energy upper stage lifted Cassini into Earth orbit and sent it on the first leg of its long journey.” Almost seven years later, on June 30, 2004, the Cassini spacecraft entered orbit around Saturn, and it is now on a second extended mission (following Equinox) of the seventh planet called Cassini Solstice Mission, which is scheduled to last until September 2017.

According to NASA’s Jet Propulsion Lab, the mission has a number of aims:


Meanwhile, Cassini’s 12 instruments have returned a daily stream of data from Saturn's system since arriving at Saturn in 2004.

Among the most important targets of the mission are the moons Titan and Enceladus, as well as some of Saturn’s other icy moons. Towards the end of the mission, Cassini will make closer studies of the planet and its rings.

The spacecraft is named after Giovanni Domenico Cassini [1625–1712), an Italian-French astronomer, mathematician and engineer who first made publicly known a number of the moons of Saturn; while born in Italy, he made these discoveries while in France. He had moved to France in 1669, and with a grant from Louis XIV set up the Paris Observatory, which opened in 1671. Cassini changed his name to Jean-Dominique Cassini and became a French citizen in 1673.