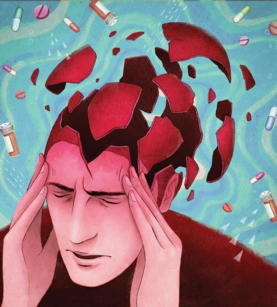 Headache of Headaches: Migraines affect 730 million individuals worldwide, where an episode can last between four and 72 hours. Scientists now say that the source of these headaches is found in the trigeminal nerve system, the human brain’s primary pain pathway; people who reported migraines had elevated levels of calcitonin gene-related peptide (CGRP), a neurotransmitter. Such is the science supporting new drug therapies.

Although there are drugs to treat migraines (i,e, triptans) and reduce the symptoms after they start, there have been no drugs to prevent these debilitating and painful headaches. that is, until now, says an article (“New Nerve Drugs May Finally Prevent Migraine Headaches;” November 17, 2015,  by David Noonan in Scientific American. ”Now a new chapter in the long and often curious history of migraine is being written. Neurologists believe they have identified a hypersensitive nerve system that triggers the pain and are in the final stages of testing medicines that soothe its overly active cells. These are the first ever drugs specifically designed to prevent the crippling headaches before they start, and they could be approved by the U.S. Food and Drug Administration next year. If they deliver on the promise they have shown in studies conducted so far, which have involved around 1,300 patients, millions of headaches may never happen.”
Image Credit: Julia Yellow
Source: Scientific American
Posted by Perry J Greenbaum at 12:01 AM