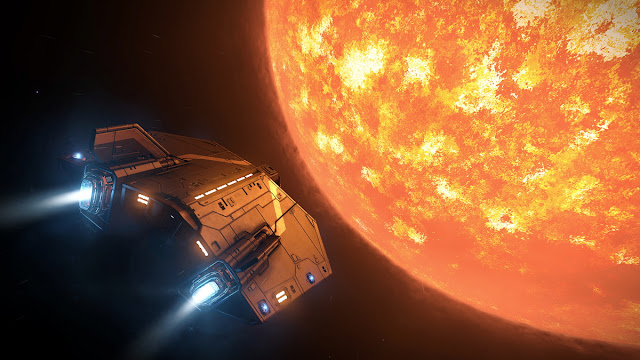 I don’t usually post reviews of video games, but their popularity can’t be denied. Moreover, there are personal reasons close to home; my two sons enjoy playing online games, as 700-million people around the world now do, according to an industry site. Instead of falling victim to easy dissent and ignoring the reality of what many in the world find important as a recreational pursuit, I decided to read the article from Space.com on what it says is a realistic game of space travel deep into our galaxy.


Instead of fighting, trading or hunting for smugglers, many players of the space adventure game "Elite: Dangerous" are turning tail and heading for parts unknown deep within the galaxy.

That's largely thanks to the game's Stellar Forge system, which brings the entire Milky Way, astronomically accurate and wholly explorable, into the game. The first part of a new expansion, Horizons, out today (Dec. 15), goes even further, allowing players to land on and explore the detailed planetary and moon surfaces as well.

Space.com talked with David Braben — founder and CEO of the game's developer, Frontier Developments — about how "Elite: Dangerous" replicates a full-size galaxy, the surprises the developers and players have uncovered (and their connections to real space), and the amazing sights that materialize in that version of the Milky Way.

Players can trade, run missions, smuggle or catch pirates to make money and save up for better ships, but they can also gain rewards for discovering new stars, planets and moons. And that's the realm of the game’s Stellar Forge.

Realism is good for video games, and game developers are doing a better job in making games more realistic and in using good science to do so. This is good news, and although I am considering the purchase of this game for my oldest son, I might play a few times with him, since I am curious about this game and, moreover, it seems to support my long-time interest in space and astronomy. I also want to find out and experience the excitement that others have. After all, I might learn something.

The same industry report noted above says that more than 1.2 billion people play games of some sort on some electronic video device, including on a smartphone. (This equates to one-sixth of the world’s 7.2 billion inhabitants.) What this undoubtedly means is that any kid with an Internet connection spends some time each week playing a game. Not only kids, but many adults too now consider themselves “gamers,” and it is not only males, but females who enjoy video games.

It is true that I do not currently share an enthusiasm for video games, as many do, but it is equally true that I can see their appeal. In a world full of rules and restrictions, especially for school-aged children, video games serve a very real purpose. It gives people a sense of control in an alternate world, one in which they can enter and exit at will.  Perhaps science-based video games can help educate the world, or at least it make it more fun (to learn science).

This, however, is a moot point. After all, education is not the chief purpose; fun is, especially when kids view education as something that takes place solely in school. This is what my two boys (aged 13½ and 7½) tell me. Escapism? Perhaps, but we all find an escape now and then as appealing. One cannot always reside in harsh and unforgiving reality. I for one often find it tiring and draining.