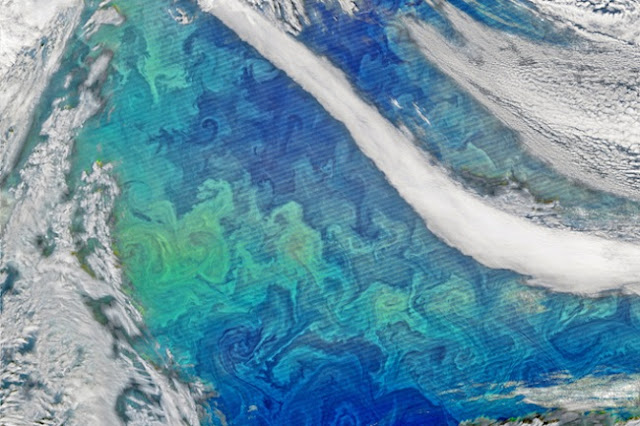 Ocean Painting: A Van Gogh-like image is the creation of a natural phenomena, a huge bloom of phytoplankton, or microscopic marine plant life found in the waters of the North Atlantic.
Image Credit: NASA
Source: Live Science

The Impressionists resided among Nature to capture the colours and sentiments it presented to the artists. who then gave their “impressions” on canvas in a move away from representative art. Nature often makes its own paintings, and with the aid of science and satellites, we get to view Nature's handiwork. In “Water Art: Phytoplankton Bloom Turns Ocean into a Masterpiece” (December 14, 2015), Elizabeth Palermo writes in Live Science: “It may look like a painting by Vincent van Gogh, but this mass of swirling colors is really a satellite image depicting a huge bloom of phytoplankton, or microscopic marine plant life, in the waters of the North Atlantic Ocean. NASA acquired the image on Sept. 23 using its Suomi NPP weather satellite. The spacecraft is equipped with a special imaging tool known as the Visible Infrared Imaging Radiometer Suite (VIIRS), which collects visible and infrared imagery. To create this artful picture, NASA combined data from the red, green and blue infrared bands of VIIRS with additional data about the levels of chlorophyll (green pigments found in algae and plants) present in the North Atlantic Ocean. Like terrestrial plants, phytoplankton contain light-absorbing chlorophyll and need sunlight to live and grow.”

For more, go to [LiveScience]
Posted by Perry J Greenbaum at 12:01 PM