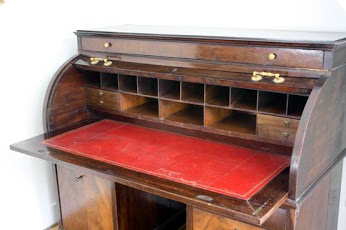 Writer’s Desk: Saul Bellow’s beautiful roll-top desk is for sale, but according to an article (March 23rd), by Brenda Cronin, in The Wall Street Journal, there is little interest among potential buyers in New York City (or elsewhere, it would seem) for this antique piece of furniture that Bellow purchased in London in the 1960s. If I had both the space and the money, I would have made a handsome offer. Can it be that nostalgia is not what it used to be?:
“It’s not going very well,” Daniel Bellow, son of Nobel-prize-winning author Saul Bellow, said of the attempt to sell his late father’s mahogany roll-top desk. His classified advertisement offering the massive Victorian-era desk for $10,000 has run in the New York Review of Books and appeared on the publication’s website for two weeks. The desk has a “leather writing surface, pigeonholes” and “appears in book jacket photo,” the ad says. The enticements haven’t yet worked, even among an audience Mr. Bellow considered disposed toward memorabilia from the author of “Mr. Sammler’s Planet,” “Humboldt’s Gift” and other novels. “I guess space is expensive on the Upper West Side. Nobody’s got room for a giant piece of furniture,” Mr. Bellow said. “I thought, well, this will provoke discussion. But it really didn’t.”
Photo Credit: Daniel Bellow
Source: Wall Street Journal
Posted by Perry J Greenbaum at 8:09 AM