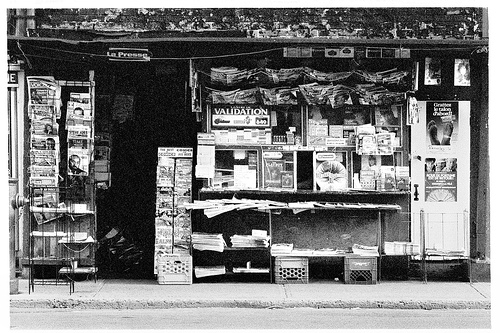 Newspaper Stand on the corner of av des Pins and boul St. Laurent (Pine and St. Lawrence) in Montreal looks similar to the ones I remember in my youth. By 1996, none existed, a result of municipal bylaws and declining sales. Decades earlier, these mainly wooden corner kiosks were thriving and were as common as mom-and-pop shops. There were many newspaper stands near where we resided on avenue du Parc in the 1960s; the closest was on the corner of Parc and Mont-Royal, across from Fletcher’s Field. Every Saturday morning, my brothers and I would go to buy our comic books, each costing 12 cents (prices were raised two cents in late 1961), the same price as a candy bar. We also picked up the Saturday newspaper, The Montreal Star, which was a fat weekend edition.
Photo Credit: Kate McDonnell, 1991
Source: Spacing.ca