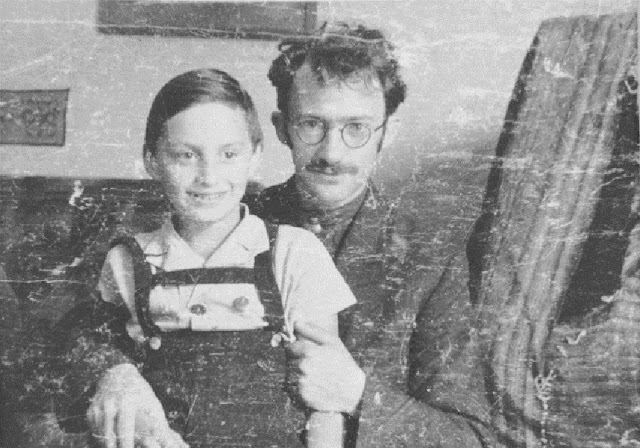 Abraham Sutzkever [born in 1913 in Smorgon, Rusian Empire; now Smarhon, Belarus–died in 2010 in Tel Aviv] posing with child artist Samuel Bak [born in 1933 in Vilna, Poland, now Vilnius, Lithuania] shortly after the liberation in 1945. Renee Ghert-Zand writes for The Forward: “Abraham (Avrom) Sutzkever was born in 1913 in what is now Belarus. His family fled to Siberia during World War I, and later settled in Vilnius (Vilna), where Sutzkever grew up and went on to study literary criticism at the University of Vilna. His poetry chronicled his Vilna childhood, his time in the city’s ghetto during World War II, and his and his wife’s escape to the forest to join Jewish partisans under the command of Moshe Judka Rudnitski. After the war, Sutzkever testified at the Nuremberg Trials and immigrated with his wife to pre-State Israel in 1947. He died in Tel Aviv in 2010 at the age of 96.” Bak’s artistic talent was first recognized in the Vilna Ghetto, when he was nine. After the war, and after spending time in a DP Camp (Landsberg in the American zone), Bak and his mother immigrated to Israel in 1948; he eventually settled in the United States, in 1993, and resides in Weston, part of the Boston metro area. The Pucker Gallery in Boston writes: “Bak’s work weaves together personal history and Jewish history to articulate an iconography of his Holocaust experience.” For more, go [here] and [here] and [here] and [here] and [here].
Photo Credit: Facing History & YIVO Institute for Jewish Research, New York.
Posted by Perry J Greenbaum at 12:01 PM