A.M. Klein at the Jewish Public Library in Montreal


“There is nothing more wholesome in the entire world than a broken Jewish heart.”
—Rabbi Menachem Mendl of Kotsk [1787–1859],
cited in Hasidic Tales of the Holocaust (1982) by Yaffa Eliach 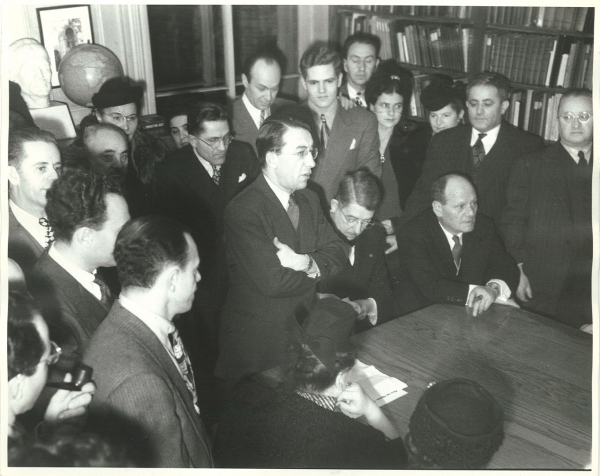 A.M. Klein [1909–1972] (standing in the center): at the Jewish Public Library in Montreal, on November 25, 1945. Valérie Beauchemin and David Gilbert for the Museum of Jewish Montreal write: “Group portrait, including Maurice Hartt (at that time a Member of the Legislative Assembly of Quebec, later a federal MP), Pierre Van Paasen, Michael Becker, and A. M. Klein, upon the occasion of the visit of Pierre Van Paasen (a Dutch-Canadian journalist who supported Zionism) to the Jewish Public Library, November 25, 1945. Standing centre is A. M. Klein.” This would be at the time that the facts of the Holocaust and of the 250,000 Jews in DP camps in war-ravaged Europe have become more widely known—it would take years for most of these Jewish war refugees to be resettled. Klein was deeply affected by the Holocaust: as a Jew, as a poet and as human being. For more, go [here], [here] and [here].
Courtesy: Museum of Jewish Montreal; Jewish Public Library Archives; Montreal
Posted by Perry J Greenbaum at 12:01 PM