Hasidic Tales of the Holocaust (1982)

“The biggest miracle of all is the one that we, the survivors of the Holocaust, after all that we witnessed and lived through, still believe and have faith in the Almighty God, may his name be blessed. This, my friends, is the miracle of miracles, the greatest miracle ever to have taken place.” 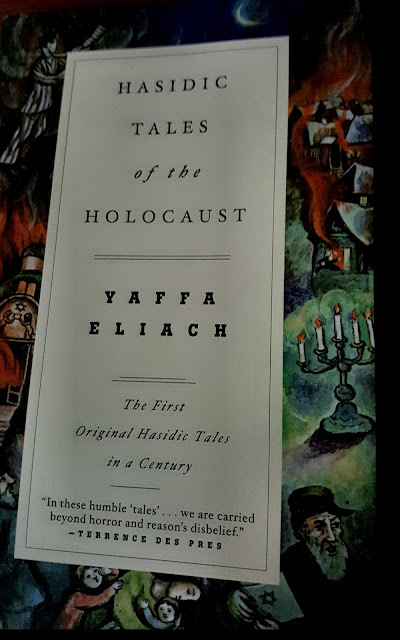 Hasidic Tales of the Holocaust (1982), by Yaffa Eliach [born as Yaffa Sonenson in 1935 in Eishishok, Poland–died in 2016] in New York City, is like no other book I have ever read.

Many of the eighty-nine Tales are fabulous, and defy everyday belief.  Yet, such is what I would expect when the abnormal becomes normal, which is what took place during the Shoah; this is also my expectation when reading about the Hasidim. The Tales are never boring, not at all. Quite the contrary. At the centre of these tales is the zaddik, writes Yaffa Eliach in the Foreword:

The Hasidic tale draws from both European literary tradition and from a variety of Jewish sources—Bible, Midrash, Kabbalah, and others. Central to many Hasidic tales is the singular, almost mythological charismatic personality of the zaddik, the saint. Unlike the Greek or Christian hero, the zaddik possesses a larger-than-life personality and mystical powers which enable him to transcend the historical reality of his surroundings. He can endow the pain and the suffering of his Hasidim (his followers, literally “The Pious”), as individuals or as a multitude, with personal hope, with national and universal meaning. The zaddik struggles to remain optimistic even in the valley of death. His concept of eternal time enables him to surmount the brutal reality of his temporal surroundings. He is determined to believe that evil is transient and good must ultimately triumph. Faith becomes an optimistic link, providing the structural continuity between past and future, while endowing the wretchedness of the present with dignity. (xviii).

Having dignity is such circumstances is unimaginable today, and, yet, its importance cannot be over-emphasized. It is dignity that kept the souls alive as much as faith and hope in the transcendent, a profound idea that their Nazi persecutors, with their rationalist racist theories, could not (never) apprehend or understand. Suffering without a purpose will defeat you; suffering with a purpose might (perhaps will) help you overcome it. Chaim Potok writes: “Its true stories and fanciful miracle tales are a profound and often poignant insight into the souls of those who suffered terribly at the hands of the Nazis and who managed somehow to use that very suffering as the raw material for their renewed lives.”


Such people ought to be remembered, and Prof. Eliach has done so in a remarkably good and generous way, an unforgettable way, I might add, with this book, with her research and with the exhibit of photos of Jewish life in the Lithuanian town of Eisiskes. Yaffa Eliach (born Yaffa Sonenson; married Rabbi David Eliach in 1953, and then the couple moved to the United States), a Holocaust survivor and historian, is also an interesting and notable  person, who has done tremendous pioneering work in the field of Holocaust studies; she was Professor in the Dept. of Judaic Studies of Brooklyn College, City University of New York; and Director of the Center for Holocaust Studies, Documentation and Research. For more, go [here] and [here] and [here] and [here].
Posted by Perry J Greenbaum at 12:01 AM