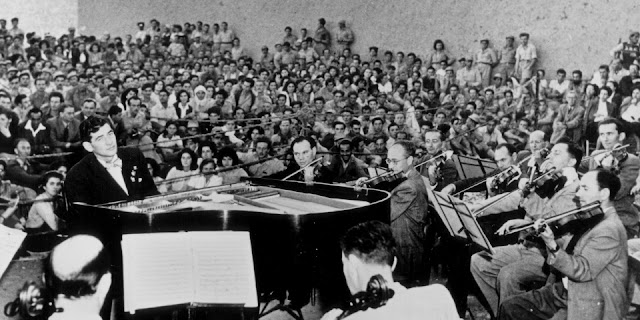 Leonard Bernstein [1918–1990] in Beersheba, Israel (also Be’er Sheva; בְּאֵר שֶׁבַע) on November 20, 1948). It was Bernstein’s second visit to the Land in less than two years. During Israel’s War of Independence (1947–49), Bernstein, aged 30, performed all over Israel—forty concerts in sixty days– with the Israel Philharmonic Orchestra, including here in the midst of the Negev, in Beersheba. Susan Gold writes: “There in the desert, an archaeological dig served as the concert venue, its high walls creating a three-sided amphitheater, and a makeshift stage was constructed. As reported by the South African writer Colin Legum: ‘The well of the amphitheater is alive with chattering soldiers–men and women of the front-line army, Jews from Palestine and the British Commonwealth and U.S., Morocco, Iraq, Afghanistan, China, the Balkans, the Baltic, even one from Lapland." Local residents arrived, and some wounded soldiers were transported by ambulance from the hospital nearby. At 3:30 PM, the concert began. Bernstein played three concerti in a row, not only a bonanza for his listeners, but also a first for him: Mozart’s K. 450 in B flat, Beethoven’s First Piano Concerto, and Gershwin’s Rhapsody in Blue, a most extraordinary and ambitious encore! A violinist supported Bernstein's chair when it began slipping along the precarious platform.’ ” For more go [here] and [here] and [here] and [here].

Via: Leonard Bernstein at 100