Reuben Brainin With His Four Sons 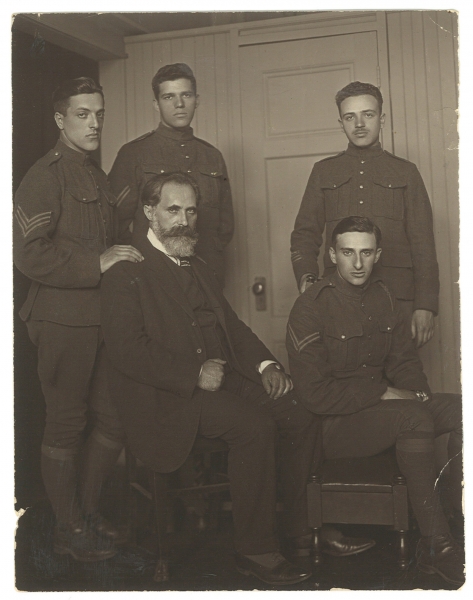 Reuben Brainin [born in 1862 in Liadi, Byelorussia–died in 1939 in New York City] and his four sons who all enlisted in the Jewish Legion during the First World War. Richard Kreitner for the Museum of Jewish Montreal writes: “In 1912, Brainin moved again to Montreal, where he began a three-year stint editing the Yiddish-language community paper Keneder Adler and thereafter the rival daily Der Veg, which was formed to challenge the more affluent, assimilationist members of the Jewish community, and to support the creation of a national Jewish congress. Brainin became involved in community politics, including labour strife in 1914 (during which he acted as a mediator between the two sides), and refugee relief efforts during World War I. Along with Yehudah Kaufman, Brainin opened a Jewish reading room in 1914, which eventually became Montreal’s renowned Jewish Public Library. In that same year, he also played an important role in creating the Yidishe Folks Shule (Jewish People’s School).” During this time that he resided in Montreal (1912–1917), he lived the latter part at 533 Ave Davaar in the Outremont neighbourhood. He then left for New York City, where he wrote for a number of Jewish journals and newspapers. Although he died in New York City, he requested that he be buried in Montreal, and his books donated to the Jewish Public Library. For more, go [here] and [here].
Courtesy: Museum of Jewish Montreal; JPL-A. Special thanks to Judy King Fonds.
Posted by Perry J Greenbaum at 12:01 PM