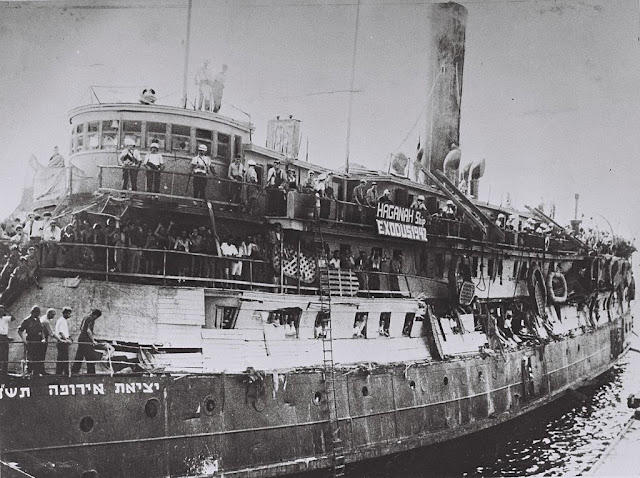 Exodus 1947: at the Haifa Port (in July 1947), after the British takeover. Note the sign “Haganah Ship Exodus 1947.” The story is well known, but as a reminder I cite the United States Holocaust Memorial Museum (USHMM): “In July 1947, the President Warfield left Sète, France, for Palestine. It carried over 4,500 Jewish men, women, and children, all displaced persons (DPs) or survivors of the Holocaust. Even before the ship (by then renamed the Exodus 1947) reached Palestine’s territorial waters, British destroyers surrounded it. On July 18 a struggle ensued between British naval forces and passengers on the ship. A Jewish crew member and two passengers were killed. Dozens suffered bullet wounds and other injuries. Attempting to make an example of the Exodus 1947, the British towed the ship to Haifa and transferred the passengers onto three navy transports which returned to Europe.” The passengers, deemed illegal, were sent back via three caged prison ships to Germany’s DP camps in Hamburg (which the British controlled assiduously) with its passengers, Jewish Shoah survivors. Undeterred, and driven by a moral imperative, most found a way to reach Palestine by the time Israel declared itself a state less than a year later, in May 1948. For more, go [here], [here] and [here].
Photo Credit: Frank Shershel [1907–1981]
Courtesy: Wikimedia Commons & the National Photo Collection of Israel; Photography Department
Posted by Perry J Greenbaum at 12:01 PM