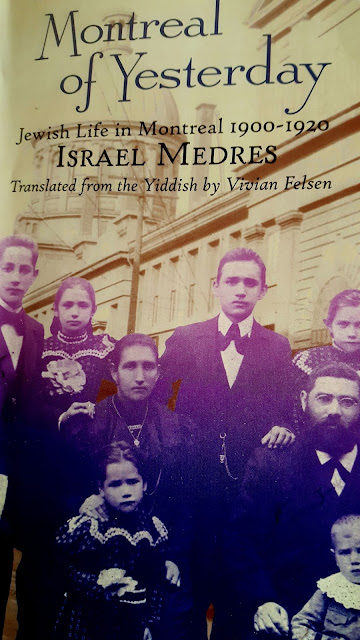 Montreal of Yesterday: Jewish Montreal, 1900–1920, by Israel Medres [1894–1964] and an Introduction by J.I. Segal [1896–1954]. This cover photo is of a Russian-Jewish family in front of Bonsecours Market in 1915. The book contains 54 short chapters that cover a wide range of topics, including class divisions, the first socialists, the first Jewish bookstore, Canadian life, the press, art, politics, business and citizenship.
Photo Credit: ©2018. Perry J. Greenbaum

This book was originally published in Yiddish, in 1947, as Montreal fun Nekhtn; it was translated by Vivian Felsen, Medres’ grandaughter, and published in English in 2000. It had earlier appeared in serialized form in the Keneder Adler (1907–1988 ), the Canadian Eagle, Montreal’s only Yiddish-language daily. Israel Medres wrote for the daily for more than 40 years, from 1922 until his death in 1964.

The newspaper served as a source of information for newly arrived immigrants of what was happening in Montreal and in Canada; it broadened their knowledge beyond the neighbourhoods in which they worked and lived. As an example, Medres writes: “They discovered that here in Montreal besides workers and bosses, foremen and designers, peddlers and grocers, there were lawyers and judges, a city mayor and aldermen, elected members of the Quebec Legislative assembly and members of the federal parliament in Ottawa” (80).

From there, the children of immigrants, many of whom were born in Montreal or came at a young age, went to university and became the doctors, lawyers, judges, politicians, professors, engineers and business-people their parents had read about. Except in this case, they were all Jewish; and their parents’ sacrifices and hard work helped make them, along with their own desires, diligence and hard work, the mensches and machers they eventually became. This is all the more noteworthy, since this took place within one generation.
Posted by Perry J Greenbaum at 12:01 AM