Yiddish Writers at the Czernowitz Conference 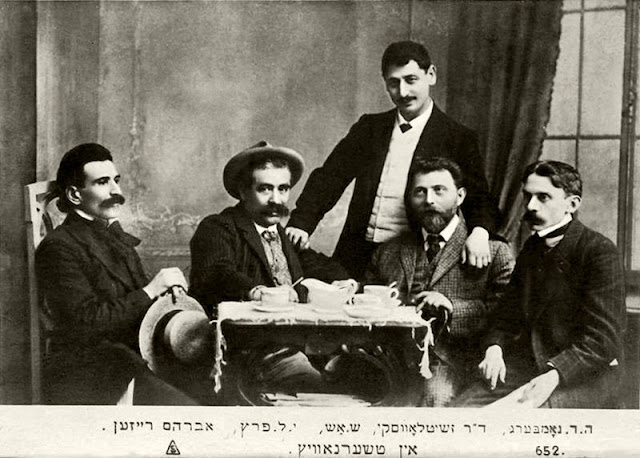 Czernowitz Conference (1908): Yiddish writers at the Czernowitz Conference: (L to R): Avrom Reyzen, Yitskhok Leybush (I.L.) Peretz, Sholem Asch, Khayim Zhitlovski, Hersh Dovid Nomberg. This was the first international conference in support of the Yiddish language and its important to Jewish life; it was convened between August 30 and September 4, 1908 in Czernowitz, then the capital of the Austrian crown province of Bukowina (now Chernivtsi in Ukraine). The conference proclaimed “Yiddish a national Jewish language.” This proved true until a number of events undermined its importance in the daily lives of Jews: 1.) cultural assimilation made Yiddish less important, particularly in the Soviet Union, where it was suppressed and in the United States, where it was not, but English was the language of economic opportunity; 2) the Holocaust killed 6 million Jews: approximately 85 percent of them were Yiddish speakers; 3.) the rise of Israel and the Hebrew language. Yet, Yiddish is heard on the street (di gas), not in the same way of 100 years ago, and not in the same numbers, but it is nevertheless heard and survives. For more, go [here] and [here] and [here].
Courtesy: Wikimedia Commons
Posted by Perry J Greenbaum at 12:01 PM