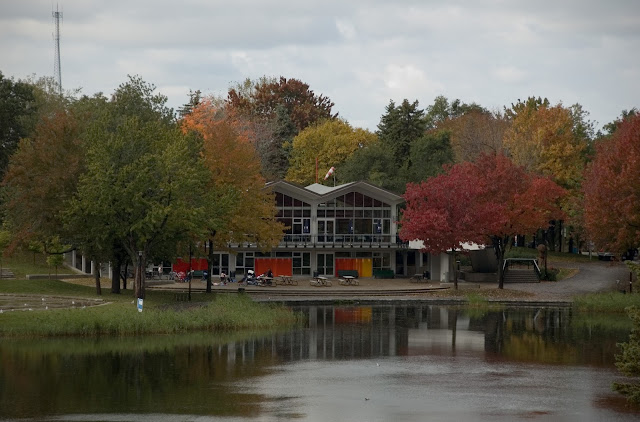 Beaver Lake (Lac-aux-Castors), sitting prominently and prettily in Montréal’s Parc du Mont-Royal. What memories this photo engenders. One of my past-times while growing up in Montreal was to play at Mont-Royal Park, or as it was often called, “the mountain.” (The highest point at the top is 233 metres (or 764 feet) above sea level. On Sunday afternoons, picnicking near “The Chalet” at Beaver Lake was what my family would often do during the 1960s. One of the highlights was getting an ice cream cone, usually chocolate, at The Chalet’s snack bar. Although I had always thought it was always there, it opened in 1961, and was soon “considered one of the most innovative buildings in Québec,” says les amis de la montagne on its site. This is how I remember it, a picture frozen in my mind. and more so now that I am far away from it in a physical sense. It is true that I miss “it.” Waxing philosophical, some would say such reflects my distance from my youth, and this makes it more attractive—its absence. Perhaps this is true, but so is it true that I miss what I do not know or now have near me—a yearning for something that cannot be. For now, I hold on to the good memories. For more, go [here] and [here] and [here].
Courtesy: Wikimedia Commons
Posted by Perry J Greenbaum at 12:01 PM