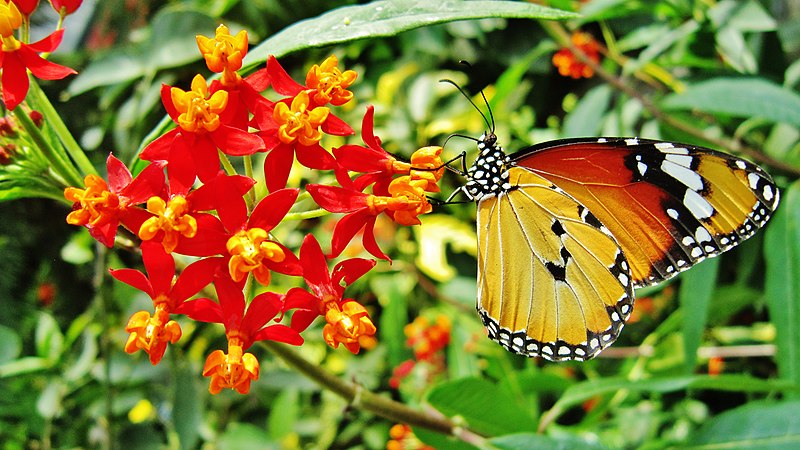 Montreal Botanical Garden (Jardin Botanique de Montréal) has many living beings, including butterflies, as this photo from March 2014 shows. Every year, the Botanical Garden has a “Butterfly Go Free” event, describing it as follows: “From late February to the end of April, the Insectarium’s Butterflies Go Free event draws thousands of visitors of all ages into the Jardin botanique’s main exhibition greenhouse. All around the visitors, more than 1,500 butterflies of about fifty different species flit about, browsing from one flower to the next. The warmth, lush greenery and graceful aerial ballet invite everyone into a world of discovery and relaxation.” The butterfly belongs to the Lepidoptera, an order of insects that include moths, whose members are called lepidopterans. According to Wikipedia, “About 180,000 species of the Lepidoptera are described, in 126 families[1] and 46 superfamilies,[2] 10 per cent of the total described species of living organisms.[2][3] It is one of the most widespread and widely recognizable insect orders in the world. [4]” And the most well-known butterfly is the monarch (Danaus plexippus), which I have not seen yet this year, but I have already seen a couple of other butterflies this year at some of Toronto’s parks; it might be a good summer for butterfly watching after all. For more, go [here] and [here] and [here] and [here] and [here].
Courtesy: Wikipedia Commons; Richard McNeil; March 27, 2014.
Posted by Perry J Greenbaum at 12:01 PM