“All I want is to follow the advice given by Elihu the son of Berachel of old, who said, ‘I will speak that I may find relief” (Job 32:20); for there is a redemptive quality for an agitated mind in the spoken word, and a tormented soul finds peace in confessing.”
—p. 2, The Lonely Man of Faith 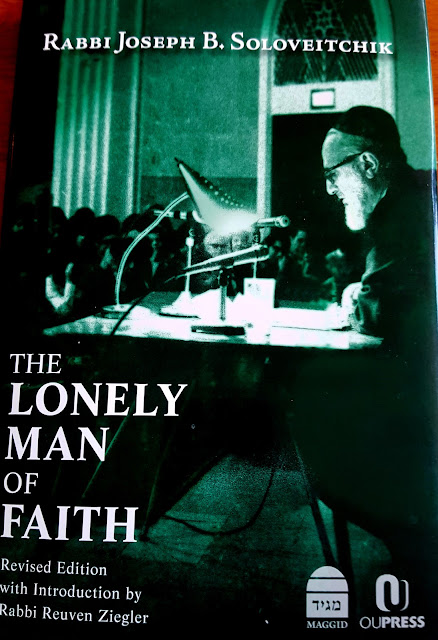 A slim volume of deep penetrating insight, by Rabbi Joseph Ber Soloveitchik, “The Rav” (born in Pruzhany, then Poland and now Belarus in 1903–died in Boston, Massachusetts in 1993). This book contains many places where one is struck by the thoughtful and sensitive writing, no less important today than when it was first written and spoken, first at a Catholic seminary in Brighton, Massachusetts; and then at Yeshiva University in New York City. After reading it you will undoubtedly come out of it understanding more than you did before embarking on this “journey of faith.”

You will understand the dialectical tension between the two biblical Adams: Adam the first, Majestic Man of Culture; and Adam the second, Covenantal Man of Faith. It is the latter Adam, the lonely man of faith, who invites the Divine, “The Lonely One” in the work of creative redemption. In contrast, the former is invited to subdue the earth and by doing so feels the power of his hands, his creation, his works and he witnesses the beauty of it all and is well pleased. There is no resolving the two. Lonely is the man of faith.

Such is the considered view of the writer of this work, a confessional of sorts from a man living later in life, around the age I find myself now, who might not have been appreciated as he is today after his death, his passing from our world, his ideas and ways not sufficiently understood. Small wonder, then, that few enter into such a covenantal world, since it is full of uncertainty, unease and unpleasantness, in contrast to the world of the first Adam, who by dint of his efforts rises to the top. He makes covenants of a material nature and achieves a measure of success.

Even so, despite all that this entails, Rabbi Soloveitchik argues that both are required for Western Man’s understanding and growth as a human, not only materially but also spiritually. Yet, Western Man has moved in a certain direction, mistaking and replacing religion for faith. It is for this reason that towards the end of this 77-page book, Rabbi Soloveitchik writes:


Western man diabolically insists on being successful. Alas, he wants to be successful even in his adventures with God. If he gives of himself to God he expects reciprocity. He also reaches a covenant with God, but the covenant is a mercantile one. In a primitive manner, he wants to trade “favors” and exchange goods. The gesture of faith for him is a give-and-take affair and reflects the philosophy of Job which led to catastrophe—a philosophy which sees faith as quid pro quo arrangement and expects compensation for each sacrifice one offers. Therefore modern man puts up demands that faith adapt itself  to the mood and temper of modern times. He does not discriminate between translated religion formulated in cultural categories—which are certainly fluid since they have been evolved by the human creative consciousness—and the pure faith community which is as unchangeable as eternity itself.

So it is and so it must be with Western Man—he overpowered by the modern secular ethos, at its root pragmatic and utilitarian, where success is everything, something that one must achieve, even in religion—i.e., where “success” is both the beginning and the end of Man’s ambition, an ambition that can appear demonic in its pursuit that failure is viewed with dread. Still, there is also an old truth, emanating/springing forth from the ways and traditions of old, that speaking one’s heart is good for the tormented soul, even if the heart still aches afterward.
Posted by Perry J Greenbaum at 12:01 AM